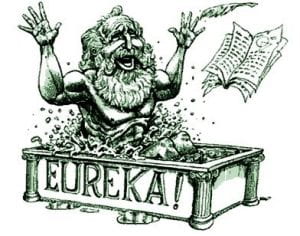 In science class we learned about Archimedes, and the discovery he made while trying to figure out if a crown was pure gold or not (it wasn’t).   His discovery was that an object displaces an amount of water equal to its volume.  Archimedes theory was that, if the crown was pure gold, and the crown weighed the proper amount, then the crown would displace the same amount of water that an equal amount of pure gold (in a bar or nugget, for instance) would displace, but, if the gold had been mixed with another substance with different density, such as silver, it would displace a different amount.  A crown weighing the same but containing some silver would displace more water, because silver is less dense than gold, giving the same weight of silver more volume.  We use his discovery to measure the volume of an irregular object- the volume is equal to the volume of water it displaces.

Archimedes made many other discoveries, including the “law of the lever”. Archimedes noted “Give me a place to stand, and a lever long enough, and I will move the world.”    in which he describes how,Archimedes discovered that, as long as the object to be moved is further from the fulcrum than the point that the input pressure is from the fulcrum,  lever will amplify the input force- which allows a person to lift things that are much heavier than themselves or whatever pressure they can naturally apply.