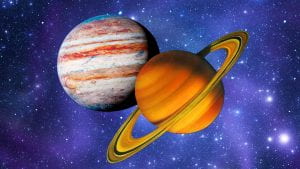 This December 21st, the paths of the two biggest planets in our solar system- Jupiter and Saturn- will only be a fraction of the moon’s width away from each other. Jupiter already appears brighter than any star from were we are, and the two are the largest planets in our system, so that the conjunction will create such a large, bright light that it looks like an enormous star. This conundrum has baffled people for a long time, and the last time it appeared this visibly from Earth, in 1226, was shortly after the planets were discovered by Galileo Galilei. 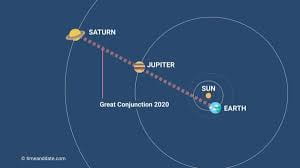 This sight is amazing, and is a sight to behold for sure, though it is not always easy to see. While this is as close as the planets have been since 1623, the conjunction actually occurs about every 20 years.  Unfortunately, most often, it cannot be witnessed because of the position of the planets relative to the Sun or because of the timing.   20 years ago, because the time it occurred was about the afternoon, the glare of the sun made it practically invisible.   The last time the great conjunction was this close was 1623, but was not visible from Earth, so the last time it could really be seen was around the dark ages .   In the story of Jesus Christ’s birth, the three wise men who brought him gifts followed a giant star to Bethlehem. Some scientists, including famous astronomer Johannes Kepler, have proposed this could also have been a time when the great conjunction was visible. No matter what, we are about to see a really cool event.

Wait… I still have some questions.

What happens if three planets come together?

What if earth were getting that close to another planet?

What happens if an eclipse is happening at the same time?